Not much to say this week, just some pretty pictures. It’s a kit supplied by Carolina Biological and our wonderful technician of the year suggested that it would be a suitable activity to include in the new Year 7 Separation topic. It’s an introduction to the concepts of Gel Electrophoresis and it works….

…. well, see what you think! Here’s the set up, with a bit of white card below the tank to help see what’s going on…

The protocol separates various dyes and includes 3 unknowns for the students to analyse.

They absolutely loved it.

Planning lessons on the hoof can be a bit nerve shredding and means I often have very little idea how something will work out. Indeed, “planning” probably isn’t the right word, but I can’t think of a better one. I find myself lurching from class to class, relying far too much on bravado, improvisation and the teaching equivalent of muscle memory to survive.

Continuing with the Year 9 diffusion work, I had had this vague idea of how to approach the question of Surface Area to Volume ratio. It’s a difficult concept, especially for Year 9 sized brains, and in the past I’ve kind of rushed past it. But this year, having let them design their own experiments to investigate factors affecting diffusion rate, I came up with a follow up thought which combines some of the most motivating features of any lesson:

So I divided the students into teams of two with a large cube of agar + indicator, a tile and a knife each. I told them to cut a cell with a volume of 8000mm3. They had to bring their cells to me with my large tray of 1M HCl, and then they would race to see which cell went clear first….

Simple idea. Luckily, I had somehow remembered to tell the technician.

I thought it might be quite fun. But I had not remotely imagined how much they would go for it. They desperately wanted to WIN, so there was frantic calculator action as they went through all the combinations of dimensions that would give them the specified volume. It differentiated! Weaker students took a while to see that it didn’t have to be a 20x20x20 cube…. There was creativity (see picture of second race below!), there was dawning realisation, but above all, there was genuine excitement. 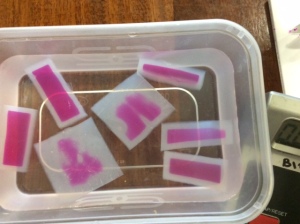 OK, so the volume was too big – next time I’ll ask for 1000mm3 – but it worked. I got them to fill in the details of their dimensions in an Excel spreadsheet and filled in the times for the different cells. That took us to the end of the single period – I know so many teachers who at this point would have been in a blind panic as the students had not written anything down (and so couldn’t possibly have learned anything…) – but it’s OK. Tomorrow we will revisit the data.

How can there be different times when we controlled the Volume of the cells?

Ah, they will say, but the Surface Areas are different!

and I will get them to calculate the Surface Areas of the cells.They will see that this also isn’t enough to explain the pattern. At which point I will introduce the idea of SA/Vol ratio and get them to calculate this. It works beautifully! I will also bet a large bar of Green and Blacks orange flavoured chocolate that they will remember it.

Half term is here. Not a moment too soon.

Five weeks into a new term as busy and brutal as any I can remember, I’ve finally got round to doing something which should probably feature more commonly in the day to day existence of a teacher…

I planned a lesson!

Yep, the complete lack of Burbling has been partly the result of exhaustion, partly a complete lack of time, but mainly just the fact that I’ve not done anything new. I’ve staggered into the lab, grabbed the relevant file from the shelf, and been privately grateful that once upon a time, I was actually able to plan lessons and design resources that are worth repeating.

Well, one of the features of our exciting new timetable is that Year 9s now have 3 lessons a week, split into a double and one single (previously, they had just had the one double). I think it’s an improvement. It means we can see them twice a week, so they haven’t forgotten everything in intervening 7 days. It means that if they miss a day for a trip or something else, it won’t be two weeks between lessons. And it means that the double can be entirely devoted to practical work, with supporting theory in the single.

We start the Edexcel iGCSE in Year 9 and launch into cells. I’ve Burbled before about the letters they write as angry babies, trying to persuade their mothers that weaning them onto raw onion with its thick cell walls and vacuoles full of sulphuric acid is a bad idea, and how much better the soft, thin cell walled starchy sweetness of banana would be… And I’ve described how we isolate cheek cells with saline rinses and centrifugation. Then we go on safari for protoctista…

Which, this week, led us to diffusion. In the past, I’ve done this….acid-bath-and-agar-blobs-noddy-noddy-version.

No preamble, no brain storming, just do the activity and interpret it.

It’s OK, but it’s formulaic – they all do the same thing – and the SA/Vol idea is actually a hard one to start with. I’ve never been entirely happy with it.

I have tried this… 1lt1-flipped-diffusion-in-jelly-blocks-1 but it’s still not quite the thing – a bit too strait-jacketed, a bit too directed.

But with the extra lesson, I tried this.

Starting in the single lesson, I bring out the block of agar with phenylthalein indicator to demo. Oooh, the excitement! It is it jelly? Can we eat it? Can we touch it?

I describe the nature of agar, and carefully carve out a little 1cm cube.

They very quickly suggest a cell – which pleases me – and I stress the point that yes, of course, cells are 3D. They remember this from the model apple cells they made in Year 7. I then introduce the hydrochloric acid and tell them about the indicator. I pour some acid into a boiling tube and pop in the cube, and pass it round.

Start with a description – what can they see?

This takes longer than you might think. But it forces them to look  – they’re fascinated – and suggestions come in. They get the idea that the cube is decolorising from the outside in. But visualising what’s actually going on is more difficult. I sketch a cube on the board – they laugh at my attempts to get the right shade of purple – surrounded by acid.

If we could really see the acid, what would it look like?

Little Baby Acid Atoms, says one. That’s OK. I can work with that.

I draw in lots of Little Baby Acid Atoms.

What are all these Little Baby Acid Atoms doing?

What state is the acid in? Yes, that’s right, it’s a liquid. So what are the Little Baby Acid Atoms doing?

A little more discussion and annotation and we have particles moving into the cube, decolorising as they go, from a high concentration to a low concentration, terms that they dimly recall because, hey, they’ve done this in Chemistry.

All of which probably sounds very similar to what biology teachers all over the world do. But it’s just the build up to the punch line…

The next lesson was joyous.

I arranged things so that they arrived to a lab with each pair of students having what they needed (no mass stampede to the back row to grab apparatus). They liked this – somehow made it seem a bit more grown up, and bit more Real Science. With roughly 3 pairs of students per treatment, they all took a slightly different approach – but it was emphatically their investigation.

In terms of experimental design, they pretty much knew exactly what to do – these are the students who were the first year to go through with my reworked KS3 SoW, with its emphasis on experimental investigation AND NOT TAKING NOTES – needing no reminders about controls or variables or measurements. Sure, they needed some tips on water baths and diluting stock acid, but they made all the critical decisions themselves – autonomy is so motivating! – and did a brilliant job.

In the next single period, each group reported their results back to the rest of the class, and there was our framework for diffusion.

I sometimes worry about whether I’m doing the right thing. This was a wonderfully heart-warming affirmation that maybe I’m onto something.

If I get to plan another lesson any time in the next year, I’ll be sure to share.