So what did my Year 9s decide to investigate with their new-found micro-biological skills?

In the end, the classes split about 50/50 into groups that had a very specific question – comparing the efficacy of different soaps, testing the 5 second rule, looking at the anti-bacterial properties of saliva (more on this later!) – and groups who just wanted to see what happened if they put stuff on the agar.

I wondered whether I should be frustrated by this lack of focus from the latter group, but in the end decided that they were simply displaying the genuinely curious approach of naieve scientists. They might not have formulated a hypothesis to test, but they were still exploring the natural world, poking it to see what happens, going “wow, that’s amazing!” when their plates disappeared under a luxuriant fungal foliage speckled with Staphylococci colonies…

But whatever shape their project took, the motivation and excitement of having complete ownership of their experiment was a joy to see. They could not wait to inspect their plates to see what had grown, to see what they had found out. Without exception, their write-ups reflected this, discussing their results thoughtfully and thoroughly.

So what did they find out?

Several discovered the importance of aseptic technique and the problems that can occur if you don’t employ it.

One very thorough and professional pair discovered that the fruit in the canteen did, indeed, accumulate more bacteria through the course of lunch time, as it was handled by more and more people.

I liked the project that sampled the locker handles from all the different year groups, suggesting that Year 7 are significantly less hygienic than any other.

There was a pretty graphic demonstration of the efficacy of Dettol – and several rather well planned projects that suggested the uselessness of washing hands at all.

Two groups showed very clearly that the 5 second rule has some validity – and I was amused by their comparison of apple, bread and jelly (!?!?). Splat.

And then there was dog saliva. A student managed to bring in a little vial of doggy drool from her canine pet. She and her friend set up plates seeded with E.coli and with paper discs soaked in the saliva. There were control discs, and comparison discs with human saliva and (wait for it) hamster saliva. Really? I asked, when they were preparing it. Yes, really. They were adamant they wanted salvia from the hamster.

So we awoke Herbie from his slumber and they persuaded him to chew on a cotton bud for a few minutes, and then rolled the cotton bud on the agar…

The hamster results were inconclusive, but there was no mistaking the huge halo of inhibition around the dog saliva. Awesome demonstration of lysozymic power!

Great fun, the whole thing, from beginning to end. And highly recommended.

I usually kick off with a question along the lines of what they were like when they first started life’s journey. Yes, that’s right, a zygote. A fertilised egg.

I draw a little cell on the board.

So what did that cell have to do in order to become you?

Again, correct; it had to divide.

I draw two little cells on the board.

I draw four little cells on the board.

No longer a zygote, but not yet a fetus, you’re an embryo. And so on. Until there’s roughly 50 trillion of them. Depending on the group, I might get them to calculate how many division this wold take.

OK, if that’s all that happened, what would you look like now?

A nice comedy moment this as they visualise the ever increasing 50 trillion cell blob that cell division alone would make them.

So what do cells need to know???

This is a really good discussion point as they figure out the necessary skill set of any cell. We eventually agree on the following:

Right! Now we’ve got something to work with. Let’s start with the division process.

I’m sure you already have an impressive armoury of amazing replication factoids to impress your students with.

Here are some of my favourites.

So how long would it take to replicate the entire genome???

If they work their calculators correctly, they should figure that the 3,000,000,000 base pairs are copied in about 8 hours.

These mutations are the basis of ageing. But how to explain this discrepancy between error rate and mutation rate?

It’s a good way of introducing the idea of check points, controlled by an army of checking and correcting enzymes that oversee the process. You might even want to flirt with the concept of nucleotide excision repair. 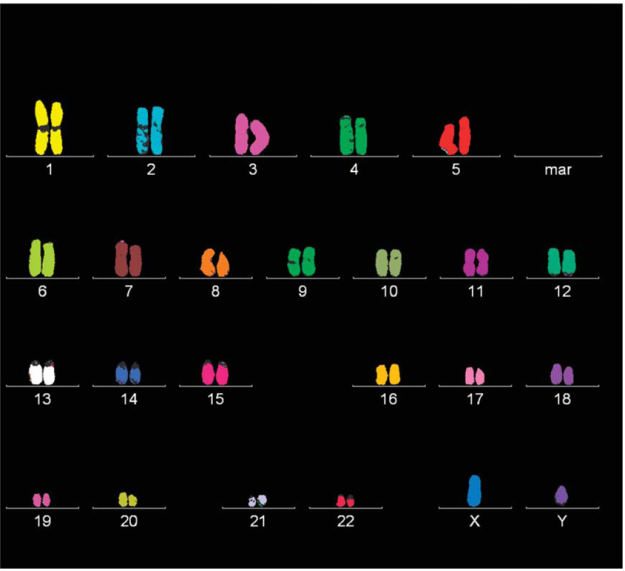 which is what the karyotype of a human breast cancer cell line, MDA 231, looks like.

There’s enough questions and disuccsion and intriuge here to last us another half hour or more. But when we’re done, we’ll launch into the cell cycle, followed by Mitosis, or possibly watch the FOP video by way of looking at the catastrophic consequences of cells not knowing what they’re meant to be…

An update on Year 9 microbiology projects to come soon!

As regular readers (both of you :-)) will know, I have no time for practical work where students already know the expected result.

The obvious and easiest improvement is to “flip” the practical, so that the students are puzzled/intrigued/surprised by the result and have to interpret the results for themselves, or at the very least are forced to ask the question “why?” so that the theory you then teach is in response to their curiosity.

But far better still is giving students the opportunity to ask their own questions, so that they have complete control, complete autonomy.

We had zoomed through Enzymes and Digestion so quickly that I was suddenly faced with the prospect of starting Plant Transport in February. I don’t know if you’ve ever tried to get potometers working in February, but it’s a pretty joyless and pointless exercise.

So I thought I’d use the time to introduce some Micro-biology and let them carry out some investigations. But it’s not on the spec.! bleat the bucket filling information shovellers.

Perhaps not. But leaving aside other considerations – such as motivation, excitement, interest – it’s a great way of putting their experimental design skills into another context.

So, lesson 1, a quick intro to aseptic technique and agar plates, followed by a little mini-project – how does bacterial load on finger tips vary with stage of washing? This takes a double lesson, as they need to be clear about various points, and I want them to do it properly, all ready to look at for the following lesson. I also want them to think about Controls and Measurements. Not only are there lots of good ideas and intelligent suggestions here, but they are also already wanting to introduce their own variations (can they use hand gel? can they compare air dried with towel dried? and so on). It’s a great illustration of what can happen when you encourage curiosity and independence.

Once all the plates are in the incubator, each one carefully divided up into Unwashed (Control), Wet, Soapy, Rinsed, Dried sections, I explain that they now have the necessary skills/techniques to ask their own question. What could they use these techniques to find out?

Next lesson, they get to look at their incubated plates, and, as generally happens, they see that washing your hands appears to have very little, if any, effect on the number of bacteria they transfer to the plate! The results actually weren’t all that spectacular, with very little bacterial variation, but they’re still fascinated by what they can see, and keen to plan their own projects.

Here’s some examples of what they went for:

and a few others that I can’t immediately recall.

Actually, the questions are irrelevant – what was so wonderful was how motivated and interested and excited they were at being allowed to do whatever they liked. They will have complete ownership, from beginning to end, and their results will be their results – a real taste of the thrill of doing original research.

A very happy end to the week. I’ll let you know how they get on…