Last year (October 16th: Chemiosmosis and DNP) I came clean about an idea that simply hadn’t worked. In my endless search for ways of making students do figure things out for themselves – I had designed an activity whereby they would work out Krebs’ Cycle for themselves.

I wasn’t expecting them to do this completely from scratch! They had already covered ATP, Chemiosmosis, and proton pumping by electrons fed into the ETC by reduced NAD. They knew that the NAD was reduced with hydrogens originally stripped from glucose by dehydrogenase enzymes. They had carried out an investigation with yeast and TTC and interpreted the results (INSERT). And they had met Glycolysis and the Link Reaction, so had met metabolic pathways and the slow tweaking and adjusting of the molecules as each enzyme makes its own small contribution. So the foundation was there. Could they complete the jigsaw?

It looked good on paper. First, a bit of human interest, the story of Krebs fleeing Nazi Germany and finally settling in Sheffield for his entire career because the people were so friendly. Then a list of the various molecules that you find in actively respiring cells (liquidised liver, I believe) – the citrate and the oxaloacetate and so on, along with their basic chemical formula. Next, a brief account of Krebs’ approach – enzyme inhibition followed by measuring the relative concentrations of these molecules. Finally, an outline of what some of the results of the enzyme inhibition.

From that, I reckoned they could figure it out. But when I trialled it on a class of intimidatingly bright students, it failed. They got frustrated and annoyed and ultimately confused. Not great.

At this point, I had two choices. Throw the whole thing in the bin and abandon it as a basically bad idea – and revert to just chalking and talking through the process. Or I could try and figure out why it didn’t work, adjust the exercise accordingly, and try again. Given the inestimable value of giving students ownership of their learning, of the understanding and recall that result from them finding things out for themselves, I opted for the latter.

The trial class had struggled, I realised, because they were trying to account for all of the atoms in the molecules, and couldn’t make any sense of the oxygens. But oxygen is not an important atom to follow in the Krebs’ Cycle – they need to keep track of the carbons and the process of decarboxylation producing CO2 – and they need to appreciate the over-arching importance of dehydrogenation and the production of NADH to power the Electron Transport Chain and thus maintain the proton gradient for chemiosmosis. But oxygen can be safely ignored.

So I went back to the drawing board and re-worked the exercise, summarising the oxygen content of each molecule with (n). Unravelling metabolic pathways a la Hans Krebs

And last week I ran it again. It worked beautifully. They quickly figured out the sequence of the metabolic pathway from the enzyme inhibition results. From there, they deduced that carbon dioxide was being produced as the number of carbon atoms went down AND they identified when dehydrogenation was taking place. To put the icing on the cake, they then figured out that by attaching Acetyl(2C) to Oxaloacetate (4C) it would take them back to Citrate (6C) and the whole thing could start again. It was bloody wonderful.

So I would urge you to try new things. That’s the only way you can find out if they work! Your students will appreciate the effort, even if it’s not 100% successful, and even an apparent disaster will teach you something about your students, your approach, your idea.

Finally, a couple of pictures taken with our Celestron Digital Imager, a bit of kit that is proving so popular with the department that I’ve had to order two more. 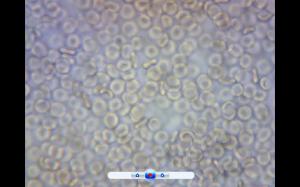 These are student slides of blood cells and cheek cells respectively (cheek cells extracted from the micro-centrifuge approach – look how plump, juicy and numerous they are!). With the imager, you can project live microscope work on to your white board, capture images (as here) and even take video footage.

Have a good week!

I am indebted to one of my colleagues for the following idea – I think it’s brilliant, many of you may already use it, or something similar, but it was new to me and sent me rushing to e-bay to purchase a World War 1 brass shell casing. Not got one in your department? You really should! I would put it up there with our Archaeopteryx fossil cast, our horse front leg bones and our giant brine shrimp tank as being an infallible source of student excitement and curiosity.

Year 13 again, I’m afraid. And as the attached powerpoint shows, it’s the story of the women working in munitions factories in WW1, and the fact that they showed dramatic weight loss (they also turned yellow and were called “canaries”, but that’s another tale). Why? Why? It’s a great example of how to open a lesson with a mystery – it grabs their attention, their imagination, and they get excited because they want to know the answer, they know they’re going to find out the answer, and, if you do it right, they get to work out the answer, which makes it even more satisfying.

So, one of the components of the explosives put into the shells was DNP, or di-nitrophenol. These days, it’s better known as an illegal weight loss pill, and there’s the tragic story of the young Leeds University student who died after taking it. But in the munitions factories it was just a weird and unexplained mystery. What does it do? It acts as a proton channel in the inner mitochondrial membrane. Now why would that make you lose weight? Their ability to explain this is a great test of their understanding of oxidative phosphorylation. You can also link it to brown fat, small babies, and hibernation. So, buy a shell! You can get them for around £10 to £15 on E-bay, and if nothing else, you get the satisfaction of explaining to the school accountant why you’re purchasing WW1 munitions…

…I’m also looking forward to being challenged over my purchase of a bottle of whisky for Year 7 Science. They’ve been studying separation techniques and I set them the challenge of working out how they would separate water and alcohol. As a consolation for not being allowed to actually do it, I’m taking them up to the school kitchen on Friday to teach them how to flambé bananas, which will be deliciously fun, but will also dramatically demonstrate why we don’t distil alcohol in the lab! Flambé bananas, I should add, are the signature dish of Bill, along with fluffy pancakes and slow barbecued lamb.

I’m afraid my idea for getting students to work out the Krebs Cycle flopped rather badly. That’ll teach me to never share an idea before I’ve tested it! Not only did it not work, they got terribly confused about everything and I had to wade in and do some heavy duty lifting to rescue things. It’s been modified now, and I’ll try it again next year, but much more carefully…

Nick and I are currently both trying to get a working model of chemiosmosis going, like the one Brian Cox showed on his programme I can’t remember the name of. Acid and water separated by some visking tubing with a couple of electrodes – a battery, basically – should be able to power a small motor. Mine didn’t even power a small LED and we ended up with about a litre of 0.1M HCl on the floor. Ahem. The origin of life needs a little more work…

One thing that does work is Endosymbiosis with Year 12. After a little background on the history of life and that crucial moment when complicated cells first appeared, I introduce them to Lynn Margulis (see attached sheet) and her idea. They then have to make some predictions about mitochondria based on this suggestion – and then find out if these predictions are true. It can take them a while to figure out what I mean by “prediction” but they will all suggest the presence of plasmids, ribosomes, binary fission, size/shape and susceptibility to antibiotics. The best of them will even predict that mitochondria should have two membranes, which is always a champagne moment.

Have a great week.

Do you look at cheek cells with Year 9? It never works, right? Oh, alright, I know there’s some disagreement on this. Bill swears it works every single time. I, on the other hand, have never, ever, ever found even a single cheek cell from the usual SwabYourInnerUpperCheekWithACottonBud technique. Seriously, not one. Even when rigorously following the Burnett Protocol. I had pretty much given up on it. After all, there are so many more interesting, findable cells out there – all the protoctists, sperm cells (no, not what you think – we get them from a cattle breeding centre), and so on. On the other hand, apart from red blood cells, it’s about the only cell of theirs they get to see, and there’s something quite soulful about watching a cluster of you slowly dying on a slide… and reflecting that that tiny dark blue smudge contains all the information needed to make another you.

So, what to do? Well, we carry out PCR with our Year 13s and after mixed results with eyebrow hair root cells, we got spectacular improvement with cheek cells obtained with a saline rinse. And it struck me, hey, look at that cell pellet in the centrifuge tube! It must be full of….. 5 minutes later, I was looking at ridiculous numbers of cheek cells under the microscope. 70 in a single HP view. Over 1000 in a single MP view. Lovely great plump juicy obvious unmissable clumped cheek cells. No more fruitless hunting around a slide!

And it was great. The Year 9s were slightly put off by the saline rinse, but gamely went for it. I encouraged really vigorous rinsing for one minute, accompanied by scraping the inside cheeks with their teeth. Three 60 second twirls in the mini-centrifuge gave a huge cell pellet. Extract it with the end of a split spill (makes a nice little paddle for scooping it up), on to slide, stain, and there are actually so many cells that you have to gently squish them flat with the cover slip. Highly recommended.

And relentlessly pursuing my objective of making my students do all the work, I came up with this idea for covering Krebs cycle. This can be rather dry, even with the wonderful John Kyrk website animations, so what can you do? Well, how about getting them to interpret the results, just as we do for Calvin’s results on Light Independent reactions? I’ve attached the exercise – let me know what you think!

That’s it for now. Have a great week!